Introduction to the Eonian Times

God has a specific purpose in creation, and it is His good pleasure to reveal His purpose to us, His creatures. God’s purpose is to be All in all of His beloved creatures (I Corinthians 15:28). God wants to fully live in and through all His creatures to bless His entire creation. Ponder that, if you will. Think of a perfect world in which God’s love reigns and there is no offense or transgression of any kind. That is the creation God is bringing about.

To achieve His purpose in creation, God centered all creation and its subsequent reconciliation in the Son of His Love. God planned everything to the minutest detail. We know this is true, because He declares that He knows the end from the beginning. He assures us that He works all according to the immutable council of His own will. God is sovereign and wise. He knows what He is doing and nothing can oppose Him. Working against Him only furthers His plan.

The following chart is from my book, “The Eonian Times: Charts” which you can download at the end of this article. On this chart, I provide the key Scriptures that show, and prove, that there are at least 5 eons depicted in God’s Word, that the eons had a beginning and that the eons conclude, therefore they are not “eternal.”

(The download for the full-size book pdf is at the end of this article.)

When God’s plan is completely finished, His purpose to be All in all will be triumphantly achieved. He will glorify His entire creation who will glorify Him in return. A perfected universe will be the result of God’s dealings through The Eonian Times.

Few people are familiar with the phrase “The Eonian Times” which is used in God’s Word 3 times. This is understandable, because translation errors in all three of its occurrences have hidden it. Unless one digs deeper than the English version, The Eonian Times will remain hidden until full enlightenment is ours at Christ’s return.

But so much we miss, if it remains hidden to us! The loss is substantial, and its consequences are felt now and will continue into the next two eons in God’s glorious plan. Rather we should learn, and let it bear the fruit God intends it to bear in our lives. Rejecting the opportunity to learn what God wants us to learn is a rejection of God Himself. I say that in the context of God’s Word, so understand accordingly.

The three verses that use this phrase, “The Eonian Time” are as follows.

God’s plan was decided upon and decreed before He even created the heavens and the earth. He kept certain parts of His plan secret until the proper time and circumstances came to reveal them. This is what the three Scriptures above are speaking about. God has now revealed His entire purpose and plan, and we are to learn it and boldly declare it to everyone who breathes as well as to the principalities, powers, mights and dominions in the heavenly, or celestial spheres.

It is our duty, then, to learn what God has revealed concerning The Eonian Times if we want to stand approved before God when Christ returns.

To achieve God’s purpose, He divided time into sequential periods during which He achieves specific objectives. Each of these periods of time is called an “aion” in the Greek New Testament. We have a direct correspondence to this word “aion” in our English word “eon.”

An eon is a period of time that has a beginning and an ending. The length of time is determined by the context in which the word appears. Sometimes the length of an eon is revealed, as in the case of the eon that includes Christ’s 1,000-year millennial reign, other times it is not. It’s imperative to study and understand the different “eons” in God’s Word in order to understand His purpose and plan more clearly and to love Him more dearly.

There are five identifiable eons presented in God’s Word. Each has a conclusion of its own. Four of them conclude in a catastrophic event, a judgment, while the fifth and final results in the Consummation and the complete achievement of God’s glorious purpose in creation. We know these sequential eons had a beginning because there are verses that talk about “before Eonian Times.”  We know the eons conclude from other equally clear verses.

Together, the five sequential eons make up what God calls, “The Eonian Times.” He declares He is “The Eonian God” because He is just as present and active during the eons as He will be afterward. Knowing He is “The Eonian God” gives us confidence that He is working all things according to the council of His own will, even now during what God’s Word calls “this current evil eon.”

The adjective, “eonian” means “of, or pertaining to, one or more eons.” As “hourly” modifies “hour” and not “days,” “eonian” modifies “eon,” not “eternity.” When the adjective from of the Greek word “aion” is translated correctly, the several Scriptures that seem to contradict Universal Reconciliation are easily and accurately resolved. Every place in the modern translations that you read “eternal” or “for ever and ever” or “everlasting,” the Greek word or words used are always “eon” or its adjective, “eonian.”

These words should never have been translated in any way that carries the sense of “eternity,” for these words confine time to the eons during which God is working out His plan. Translating them incorrectly has heaped error upon error, and has caused modern translations to become unintelligible regarding God’s purpose and plan in creation. Translate these words accurately, as they should be and all becomes coherent, congruent and clear. The Word of God never contradicts itself, and Scripture explains Scripture.

“The Eonian Times: Charts” presents a visual representation of God’s plan through the eons and is meant to be used with the third book in the Unto Perfection Series, Volume 3: God’s Purpose in Creation: The Consummation of All Things.

I encourage you to download these materials and study them. Your heart will be more than thrilled when you learn what God is actively doing to bring about His purpose to be All in all, including you!

Download Unto Perfection and The Eonian Times: Charts here.

Thanks for reading. If you have any questions or concerns, please us the contact page to reach me. God bless you in Jesus’ name. 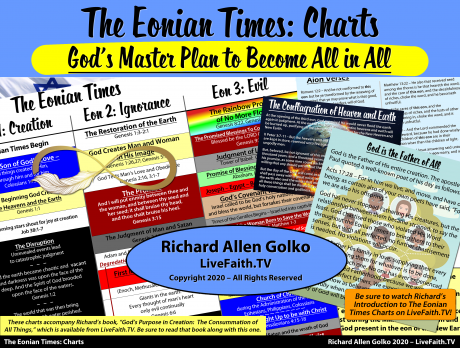